In 1948 the member companies of the Hamburg Shipbrokers’ Association had every reason to celebrate. It was a special year for the shipping industry, which had been lying idle since the end of the war. At last, the 110 shipbrokers left in Hamburg had a chance to do foreign business again. Gradually, more and more lines were resumed their operations in Hamburg. The general ban on new commissioning for vessels of all kinds was lifted in summer 1948. Permission was given to recover sunken ships up to 1500grt and repair them. And finally, from the end of 1948 on, the Potsdam Treaty permitted newbuildings up to 1500grt.

To celebrate this upswing in business Bruno Jansen, Managing Director of the Hamburg Shipbrokers’ Association since 1945, invited the Managing Directors of all the member companies to a dinner on 5 November 1948 – quite expensive at the time, but it was a good meal. And the venue had an unsurpassable maritime touch – it was the M.S. “St. Louis”, moored at the Altona landing stage. The ship had been given a makeshift repair after serious bomb damage, and was now serving as a hotel and restaurant. The evening was a complete success. It brought together 110 ship brokers, tucking into the tasty North German starter (cream of poultry soup), followed by grilled pollack steaks, and Schnitzel with local Vierländer vegetables and chocklate ice cream.

After that successful evening, they all agreed that the meal should become a regular event. In fact, it was a little earlier the next year, with the Managing Director Bruno Jansen issuing the invitations for October 29, 1949; This time the event was held in the Ratsweinkeller, and for the first time Eisbein (or alternatively Kassler) was served, with Sauerkraut, pease pudding, potatoes and bacon. This tasty traditional North German dish was chosen because by now the short ages were over and Nouvelle Cuisine was as yet unknown.

Since then this function takes place every year on the first Friday in November, at the Congress Centrum Hamburg (CCH), and has become an international meeting platform for ship brokers, ship agents, ship owners, bankers, forwarding agents, terminal operators, and all who are directly or indirectly associated with the Association. The gathering is attended by more than 5.000 people from some 50 different countries.

Since the 40th Eisbeinessen, the First Mayor of Hamburg or his deputy has regularly attended this important maritime event. High ranking ministerial officials from Berlin and Members of the Bundestag (federal parliament) are also welcomed guests.

The ship of the first Eisbeinessen

The MS “ST. LOUIS “and the history of the Eisbeinessen

Inviting the CEO and owner of the member companies of the Hamburg Shipbrokers´ Association for a dinner aboard the MS “St. Louis ” the history of the Eisbeinessen began.
The MS “St. Louis” built in 1928 at Bremer Vulkan for HAPAG as a cruise ship was in use for a regular service Hamburg – New York. During the winter season the ship served as a Cruise Ship.
The penultimate journey of the MS “St. Louis “was in May 1939, with 937 German Jews to Cuba. Although all the passengers had valid papers, their entry to Havana was denied. After long negotiations, it went on to the United States, but even there no entry permit. The MS “St. Louis “returned to Antwerp, where – after long negotiations – long an agreement could also be achieved. As a result, the Jewish immigrants were able to leave the ship and spread across several European countries. Unfortunately, the majority of immigrants came in the course of the war back into the dominion of the Nazi regime. According to the latest research 254 of them were murdered in the Holocaust.
The last Voyage of the MS “St. Louis” went from Hamburg to New York and Murmansk to Kiel, where she was a living ship for the Navy from 1940 to 1944. After heavy bombing and damage the MS “St. Louis” transferred to Hamburg in 1946 and served here at the Altona Landungsbrücken to 1950 as a hotel ship.
From this period we find one of the few memorabilia of the Hamburg Shipbrokers´ Association, the original menuw of November 5, 1948. 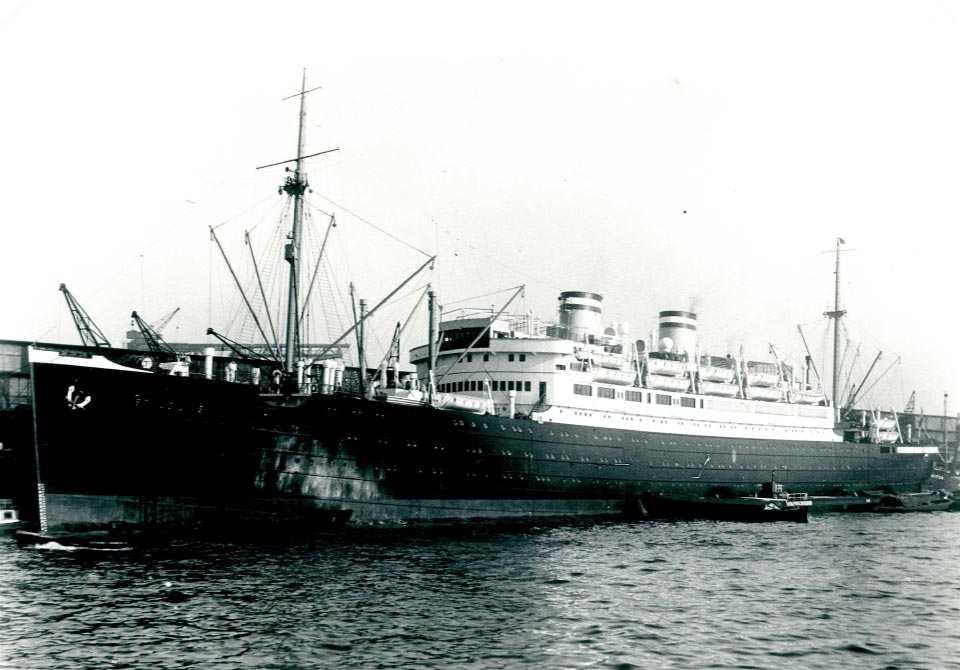 Meeting point of the first Eisbeinessen on the ship St. Louis 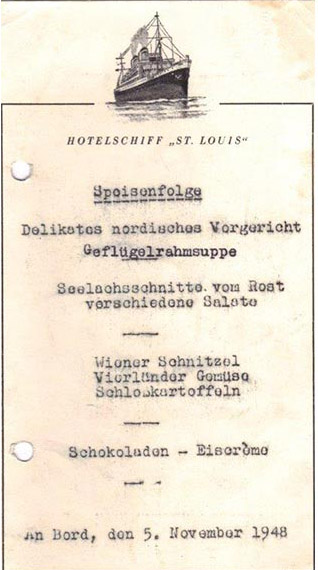 Menu of the first Eisbeinessen on the ship St. Louis